After Klaus had resolved the teething problems of the 2018D LGB promptly published a second wood burning Mogul, the 2028D. And published is being used verbatim here. The 2028D was first published in the 1987 catalog but wasn't actually manufactured and distributed until 1989.
The 2028D came with a smoke generator and featured a metallic blue boiler with the rest of the engine in black/grey-black. Both, the 2018 and the 2028 were sold for DM 995.-- or the average equivalent of one week of  salary  in 1988 ( for the average LGB customer). Please note that a lot if not all 2028 D were packed into the box for the 2018D.

The 2028 was followed by the 2019S as described in Part 1 and also by the 2119D. The Kompendium lists this engine as "non-cataloged special edition for the USA" . Interesting is the fact that LGB assembled this locomotive from the front part of the 2019 (silver color, matching smoke stack for coal engine) with the 2018 boiler part, here in black, and the engineer cabin and tender in yellow with black stripes. The print on the tender is " LAKE GEORGE & BOULDER" and on the cabin "2119".
The color scheme for the cabin and tender were reused in the Bumblebee (21192) roughly 15 years later. The "Lake George & Boulder" was probably made for a dealer group since the name spells out 'LGB' if taken first letters only. The edition volume was 2,050 typical for the heyday of LGB in the USA.

The LGB 2219S was first shown in the 1990/91 catalog and also manufactured and distributed in 1990. The loco came with an analog soundboard (in the tender) featuring chuff, whistle and bell. The distinctive brown color scheme pays homage to the typical, brown Pennsylvania RR passenger and baggage
cars. The PRR is one of the biggest and best known American Rail Roads  and had a huge array of very big and heavy locomotives and one of the biggest numbers of Moguls (standard gauge) in operation. For LGB is was almost a no-brainer to adopt this RR scheme onto their Mogul and offer it (mainly) to their American customers. Almost 5,000 'PRR Moguls' were made, the second biggest volume of a Mogul type ever made at the old, original LGB factory.

LGBoA was on a roll by 1992 and one dealer managed to convince LGB to give him a special edition just for him, his store and his clientele. Thus was born the LGB 2219DG, the Wilson Brothers Circus.
The store was Depot G out of Colorado and he sold it for a pretty stiff price. When Rolf Richter got wind of this he was quick to offer the LGB 24192, this one with sound, again an analog board in the tender.
It was said to be for the US market only. Oh well. It was sold as a set in the US with 14 items (cars,caboose, truck, animals) included. Prices ranged anywhere in the neighborhood of US$ 4,000.00. The 2219DG had a limited volume of 800 and the 24192 a limited edition of 720. The actual manufacturing year was 1995 for both.

The LGB 2319S is actually the 23192. 1993 was the year the numbering system at LGB changed from 4 digit to 5 digits.
The 23192 was pretty much the slightly changed version of the original 2019S. A spark arrestor (bear trap) was added to the smoke stack and the engine got the number "8" printed on the cabin. A snowplow was put in front. She also featured an analog soundboard (in the tender). For the first production run in 1993 about 1400 were produced.

1996 another Mogul type was made, the 22182. This was the first time LGB offered a digital sound. The same loco was offered with 3 different RR line names and numbering. #22182 displayed "THE COLORADO ROAD' on the cabin and "5" on the tender. #23182 sported "DURANGO & SILVERTON" on the tender and the number "9" on the cabin and LGB 24182 featured "NEW YORK CENTRAL RR" on the tender and the number "99" on the cabin. The front,boiler, cabin, and tender color scheme was the same on all three locos. The firebox light had become a  standard fixture in the Mogul (starting with the 2019S) and other steam locomotives and thus was also a feature on these 3 Mogul types. LGB was asking a stiff DM 2,390.00 for either of these 3 locomotives but also limiting each edition to 500 locos each. The US$ equivalent  today would be about US$ 2,000.00. Sales prices for these (used) Moguls rather tend to be about US$ 800.00 to $1,200.00. Two years ago you could get them for less than US$ 500.00....

Posted by Famous Klaus at 8:16 AM No comments:

The basic idea for a Mogul engine was born at LGB in the very early 80's. It took a few years to get it from an idea to a hand model, to early production and eventually to the accomplished best seller engine. The idea for the Mogul was born after Wolfgang and Eberhard Richter observed an ever growing American demand for LGB. Wanting to offer something truly American the idea for the Mogul was born.

The archetype Mogul was designed and first manufactured between 1852 and 1860. Soon she became one of the most built steam locomotives in America and was exported to nearly 20 countries world wide. (for detailed information about the history of the original Mogul see https://en.wikipedia.org/wiki/2-6-0) The Mogul was originally built for standard gauge as well as for narrow gauge lines. Hence it was the ideal template for LGB.

LGB started working on the prototype in early 1983. With the main body of the engine and tender built as hand model it was time for a photo shoot. To make the hand model look good a lot of details were added for the catalog shoot: Pipes, running boards, uncoupling bar and many more details made a great hand model. But it was expensive to make molds for such details. To expedite form making, preparation for serial production, actual production and distribution those details were ditched. By the end of 1984 the Mogul 2018D was delivered to dealers/stores. Immediately complaints started raining in, piling up on Guenter Ruhland's desk.

The complaints included: the engine derailed at any given occasion without obvious reason. Often enough the engine fell to her side and the smoke stack would break off. Klaus had already been in close contact with LGB and had taken over the task of resolving these issues. After days of testing and observing Klaus concluded what had to be addressed: the reconstruction of the pilot wheel and change of center of gravity. So he went to work. He designed extra lead weights to be added into the motor block. He also redesigned the pilot wheel mount securing the pilot wheel will not derail when hitting an obstruction nor cutting a switch open.
Guenter Ruhland was instrumental in implementing Klaus designs into manufacturing and the improved Mogul then became one of the best selling locos LGB ever made.

This first Mogul  2018 D  was built until 1987, in a red (boiler)/green (cabin) color scheme. It is the wood burning edition of a Mogul.There is no proof that the color scheme was a counter response to Walt Disney's 4-6-0-3 in the Magic Kingdom in Lake Buena Vista/FL.

In addition to these two Moguls LGB 'manufactured' 28 (!) other versions of the Mogul until 2006, the year they went into bankruptcy.  All in all more than 40,000 moguls were manufactured and sold.

Below find the LGB #s and the year this Mogul was first presented in a catalog:

EDITOR'S NOTE: Check your loco's for repair need. Christmas will be upon you right after Labor Day....Call Klaus for appointment/repair needs.

For the first time - Live, Work and Dine with Klaus 101

Go to Klaus 101 for detailed information 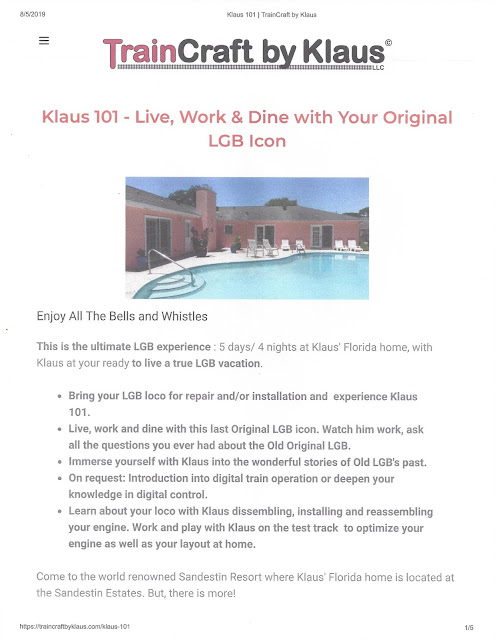 Get the full 101 on this fabulous opportunity to experience Klaus at home, at work on your own engine. Enjoy the camaraderie and immerse yourself in the Old, Original LGB world with one of the last icons of the Old LGB. Your wife/partner will have a great time enjoying the world renowned Sandestin Resort, basking on the sugar white beaches, shop-til-she-drop(s) and all the girl-fun the Resort provides. Or wants to just relax at Klaus most beautiful Florida home.

for full and detailed information of this opportunity of a lifetime!