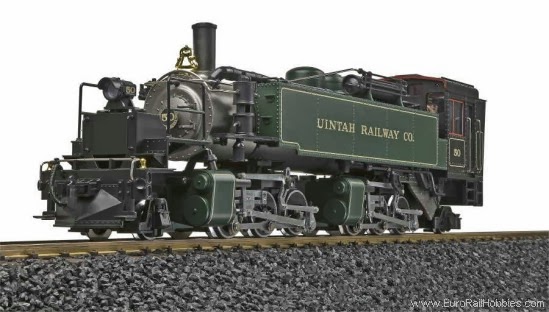 Somewhere between 2004 and 2006 the LGB # 22892 was offered through the eXtra program. Obviously, some engines hadn't sold very well and leftovers were going 'on sale' - yes it had the "250" labeling and was the same color scheme as the 20892. One last attempt to sell Sumpter Valley engines came in 2011 with the LGB# 23892 (labeling "251"), this time all were sold. Now the market wants them, but they are not coming onto the market very often, so expect to pay anywhere from $1,800 - $ 2,400.00 (condition) or more if quality decoders were added.
Both, the Uintah and the Sumpter Valley are fine examples of LGB craftsmanship. They are durable engines and fun to watch in operation. When installing decoders be careful to open the loco correctly and with caution. Screws that are torn out or forcibly reinserted damage the housing and will  fail in doing their job. Consequences will be a loose or open housing and thus impacting operation of the loco. Some screws are hidden and will defer opening the engine body. Do check the blowup drawing before laying hands on your LGB engine. Or simply call Klaus and have him do the job for you!
Posted by Famous Klaus at 1:37 PM 1 comment: